This is, even for a conservative judge, an unusually uncompassionate series of rulings. If you read her decisions, she is all very rational and collegial as she destroys the lives of little people. I am very much reminded of smart abusers I have known and read of, who can talk their way out of almost anything. Barrett has twists in her character. I worry about her children.

Look at Brett Kavenaugh, look at Neil Gorsuch, gods help us, look at Amy Coney Barrett. All three seem deficient in some basic empathy. Kavenaugh, who probably raped dozens of women as a young man. Gorsuch, who opined that it was just fine for a trucking company to fire a man for leaving a load so as to avoid freezing to death. Barrett, with decisions making excuses for rapists and racists.

Surely these people are deranged. Surely there is some problem with them, some aristocratic personality disorder.

We only thought we ended aristocracy with the Revolution.

What would it take to truly end aristocracy?

Could we do it? Would it lead to a workable, lasting society? I do not know. Trying is surely worthwhile.

Who Is Amy Coney Barrett?

The Time article on Barrett describes her as like Scalia but with fewer rough edges.

We know, generally, that she has been nominated for three things: (1) reliable support of voter suppression, (2) a reliable radical “Christian” conservative vote, and (3) reliable support of brutal pro-business, pro-wealth policies. Possibly there is (4) support of the fossil fuel industry; her father was a long-time attorney for Shell Oil. There may even be (5) racism – she is from Metairie, Louisiana, a place with a dark Klan history and the place which elected white supremacist David Duke to the Louisiana state legislature.

Her experience as a judge is quite limited. She has limited trial experience and only three years of judicial experience on the Seventh Circuit. She is not, regardless of how smart and knowledgeable she is, qualified.

She is also dissembling and concealing information about her politics. She is very radical, and she is a senior member (a “handmaid,” forsooth) of People of Praise, a secretive evangelical group, nominally ecumenical but mostly Roman Catholic, group which holds strongly that women are to be subservient to men, which raises the question of who, if anyone, she is subservient to.

I suspect that part of the reason her nomination is being rushed through is that, like the nomination of Brett Kavanaugh, her nomination would not stand up to a thorough investigation. This is a woman who, taking advantage of many feminist victories, intends to take women's rights away. Is she, then, a well-mannered sociopath? A fanatic? Or someone who simply does not see people outside her chosen circle as human, like the slaveholder wives of the South who would politely and decorously order whippings and worse?

Just who is Amy Coney Barrett?

A Telling Observation on Voter Behavior

Or, Converse in the streets.

YOU THINK voter logic is like: A → B → C → D. In actuality, voter logic is more like: A → Purple → Banana → 18 […] The most pervasive bias in political coverage is not left vs. right it's “follows politics” vs. “doesn't follow politics.” – Tweet by Time correspondent Charlotte Alter.

A few months back, I did a rough estimate of how many Senators would die if COVID-19 started spreading in the Senate. At that time, the only Senator who had the disease was Rand Paul and, apparently, he wasn't well-liked enough to spread the disease. But the White House, at its nomination ceremony for Amy Coney Barrett, has taken care of that little problem: Republican Senators Ron Johnson, Mike Lee, and Thom Tillis have been infected. It's time to bring the chart back, so here it is again: 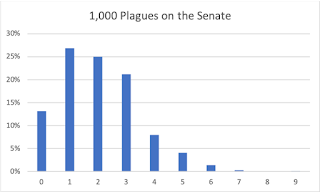 The odds were almost 9 in 10 for at least one Senate death and the chance of one to three Senators dying were roughly 3 in 4.

COVID-19 and the Crawl Door

In the Japanese tea ceremony, guests, to enter the tea house, must come in through the nijiriguchi, the crawl door. Even mighty lords must crawl when they are guests at the tea house. Mighty lords turn back into mighty lords when the ceremony is over, of course, but – the teamaster hopes – they will remember that there is something beyond their rule.

The Trump administration, rejoicing over the fall of their enemy Justice Ruth Bader Ginsburg, planned a great ceremony to introduce their replacement for Justice Ginsburg, chosen to undo everything Justice Ginsburg stood for. They held the ceremony in the open, in the White House Rose Garden, and observed inadequate precautions against COVID-19. Unmasked people sat closely and embraced each other after the ceremony. Then they went inside the White House to schmooze.