Study: 1 in 25 People Condemned to Death in the USA Likely Innocent

This is just a "what he said" post, linking an AP article, but the subject seems important enough to make it worthwhile:

About one in 25 people imprisoned under a death sentence is likely innocent, according to a new statistical study appearing in the Proceedings of the National Academy of Sciences. And that means it is all but certain that at least several of the 1,320 defendants executed since 1977 were innocent, the study says.

The original article is here. The full text is available without charge.

Posted by Raven Onthill at 9:06 AM No comments:

The Killing Field on the Arizona Border

Me, five years ago:

Oh, you hominids could make the border into a killing field, make a feast for us corvids. That would stop them from coming, probably.

When you look at a map that shows where such bodies are recovered in southern Arizona -- journalist Margaret Regan has termed it a “killing field” — there is a thick red cluster of dots over the Tohono O’odham reservation. This area has the highest concentration of the more than 2,300 remains recovered in Arizona alone — approximately 6,000 have been found along the whole border -- since the Border Patrol began ramping up its “prevention by deterrence policy” in the 1990s. And as Kat Rodriguez of the Colibri Center for Human Rights points out, these numbers are at the low end of actual border deaths, due to the numbers of remains found that have been there for weeks, months, or even years.

Me again, five years ago:

The people who ran Abu Ghraib and run Gitmo, they'd be happy to do it for you. And then they'd do it to you.

When your policies, be their goals ever so noble, lead to monstrosities, it is time to change them.
Posted by Raven Onthill at 8:54 AM No comments:

McCutcheon and the Roberts Court: a Radical Response

In its quest to become the worst US Supreme Court since the Taney Court, the Roberts Court rendered a 5-4 decision weakening yet again US campaign finance law, and allowing very wealthy donors to give even more money to political campaigns. (Case: McCutcheon v FEC.) And, as usual in this Court's split rulings, The Loser is the Law, as the Roberts Court creates yet more legal chaos.

In reaction, I have come to the conclusion that it is time to change the composition of the Court either by impeaching one or more of the conservative Justices, appointing a tenth justice, or in some other way. The Justices Oath says, "do equal right to the poor and to the rich" and this Court's conservatives are not doing that. Other reasons, I am sure, can be found. In any event, it is time to change the Court before it does even more harm. It seems to me that, as with the worst decisions of the Taney Court, it is going to take constitutional amendments to repair the damage this Court has done to American democracy.

Time to get started.

Posted by Raven Onthill at 10:06 PM No comments: 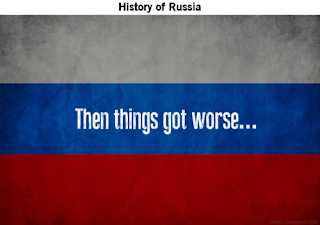 (Via Yellowdog Granny.)
Posted by Raven Onthill at 8:57 AM 1 comment:

An American Ukraine Expert, and His Blog

"Dr. Alexander Motyl is a scholar and an artist. By day he is a professor of political science at Rutgers-Newark. A specialist on Ukraine, Russia, and the USSR, and on nationalism, revolutions, empires, and theory, he is the author of 10 books of nonfiction, …"