Beijing on the North Mississippi

In preparation for the Republican National Convention in Minneapolis, local and federal police are doing just what the Chinese did in preparation for the Olympics in Beijing--cracking down on dissent. No-knock raids, no warrant raids were conducted against progressive groups. Fortunately, communications is still working, and word is getting out. Unfortunately, the amount of grief these non-violent progressives are going through is considerable; the police are probably going to try to hold them until Wednesday and their homes and computers will be searched. I doubt they will get their computers and media equipment back. Glenn Greenwald at Salon. Lindsay Beyerstein at The Campaign Silo: 1, 2, 3. Jane Hamsher, also at The Campaign Silo. New York Times. Minneapolis Star-Tribune. John Emerson's links page.
Posted by Raven Onthill at 6:04 PM No comments:

And then, things started to happen very fast

Beijing in the Rockies 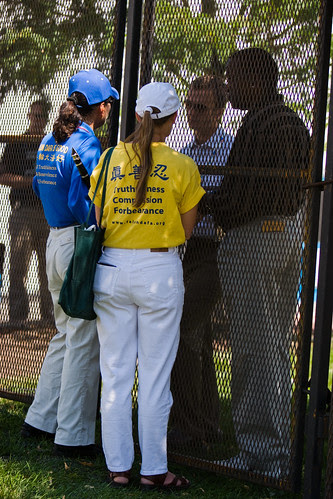 "Free speech zone" in Denver. The press doesn't even come by. Damn, but we need some good old-fashioned anarchism.

Amazing numbers of police have poured into Denver for the Democratic National Convention.

And on the fourth of August, the Denver City Council approved a new ordinance which, among other things, prohibits the carrying buckets of feces.

Posted by Raven Onthill at 1:25 PM No comments: